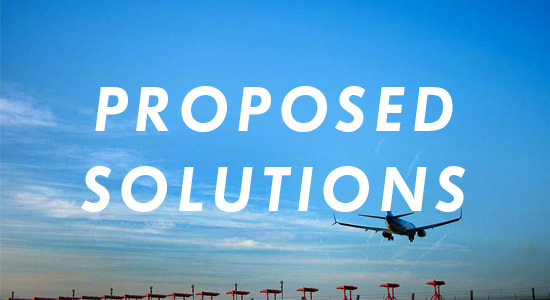 We can all agree that the problems created by operations from local airports are an issue for health, safety and wellness of those living around these airports. Where the rubber hits the roads is in finding solutions to these problems that can benefit both the airports themselves and the nearby residents. Below we have proposed a number of solutions, from large to small. Keep reading for further details.

Enforcement of Existing Rules and Regulations by the FAA

Title 14 of the Code of Federal Regulations, Section 91.119 of the General Operating and Flight Rules states that:
As has been demonstrated time and time again, General Aviation aircraft have a tendency to disregard this regulation. Is it because they are unaware, or is it because of lax enforcement? Either way, the problem created is the same. With the advent of flight-tracking software, it has never been easier to determine the precise altitude and location of aircraft that violate these regulations. The FAA could reduce many of the dangers from these low-flying aircraft by taking reports filed seriously and enforcing those rules that are currently on the books.

Enforcement of Existing Rules and Regulations by the Airports

The fundamental problem is that the interests of Jefferson County, RMMA and the FAA are misaligned with the interests of surrounding communities and local governments that are negatively impacted by airport development and operations.  Without first addressing this fundamental issue, progress to reduce the noise that negatively impacts surrounding communities is not possible.

It is glaringly obvious that there is limited to no influence that individual citizens, or even individual municipal governments, have in effecting real change in airport operations, development plans and new tenants.  One only need read the summary of the Louisville & Superior CNR efforts of dated 4/9/2019 to reach the same conclusion.  The following excerpt from the summary is especially poignant:
That summary was written two years ago after more than a year of complaints from people in the communities affected by the noise started, and here we are.  Three meetings into a new CNR discussing the exact same issues!!  What solutions resulted from the Louisville & Superior CNR that were implemented and actually reduced noise?  RMMA updated their Voluntary Noise Abatement Procedures, hung a sign up at the airport and made a post on the RMMA FB page with a link to the revised procedures.  However, this hasn’t reduced noise.

The fundamental problem is that the interests of Jeffco, RMMA and the FAA are misaligned with the interests of surrounding communities that are negatively impacted by airport development and operations.  Until this changes, nothing will change.  It doesn’t matter how many 3-minute speaking segments we use to share about how we're impacted, or how many flight density maps that we show with areas that are completely black from so many flights, or how high the mountain of facts are that we provide to back up our claims.  No meaningful action will be taken that reduces the noise that we deal with daily until the fundamental problem is resolved.

A potential solution is for RMMA to be owned, managed and controlled by the same governments who are a party to the CNR IGA.

We know that there is growing economic and political pressure to reduce greenhouse gas emissions from fuel for transportation. And the problem in aviation is compounded by lead in av gas. Lead is unsafe at any level. Across the world, as well as in the United States, there is a race to develop new technologies to achieve greener skies. Aviation is the only mode of transportation that really has not moved aggressively towards zero emissions.
We live in times that demand action to address the climate emergency. Proponents of electric aviation say their business models do not rely on altruism but instead on the free market. RMMA, as well as other regional airports, could become a hub of development and manufacture for small electric aircraft. This would bring jobs and a sustainable income without compromising the health of surrounding communities.

Colorado is currently testing a Remote Tower Project at the Northern Colorado Regional Airport in Loveland, although testing was delayed due to the pandemic. Resuming testing of this system would greatly alleviate the impact of flight training operations and those living around and within any transit path of a regional airport.